From my own research and experience there were a lot of bell combinations available as most early horns were made to order by hand, so there are several variations that exist. These bell pictures below are the most common variations in bell and engravings: 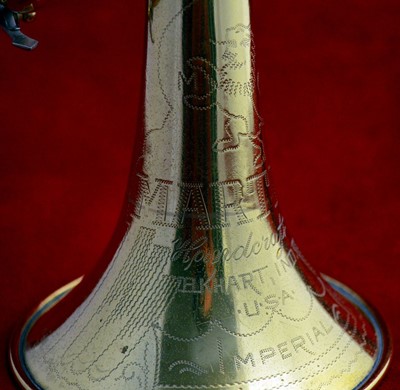 M Bell – this is thought to be the bell to go for as it’s rumored to be the bell that was later used on the Martin Committees.There is no sufficient evidence yet to find information to prove this to be true – so don’t take that as a truth. However, the M Bell is the most popular bell for resale purposes though due to this rumor currently. Therefore, if you had a choice perhaps this could be a deciding factor? This bell engraving appears on the medium and large bore models – even though they are different in general design. 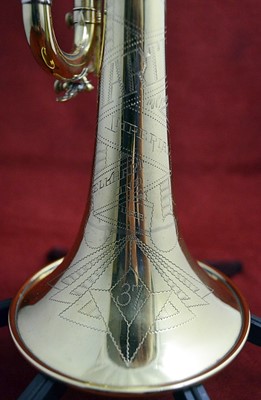 #37 Bell – has the same engraved bell as above, but with the number 37 engraved on the centre of the bell. Thought to be a copy of a Bach 37 style but there is no evidence to support this at the time of writing. It is more likely that this an engraving placed on horns made during 1937. 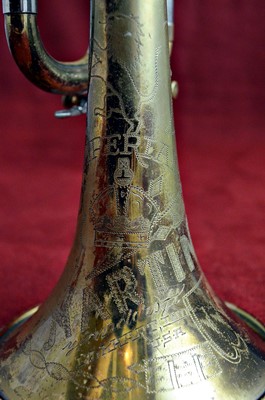 #38 Bell – quite possibly this appeared on horns only made during 1938. The bell has the Lion Engraved on the bell with him holding his paws open. The 38 appears between the two paws. I’ve personally only seen this on a large bore model. The image above also shows a crown in the engraving which doesn’t appear on the normal M bells. 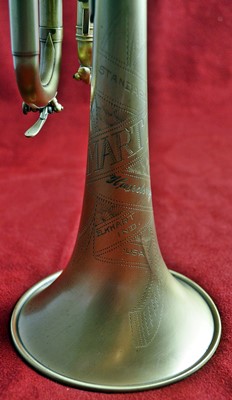 Standard Bell – (Image shown is from a Handcraft Standard). These bells share the same design with the Handcraft Standard. The only difference between the two is the writing at the top will be ‘Imperial’ or ‘Standard’ depending on the model of instrument. Standard trumpets can be easily identified as they are all brass – Imperials have the Nickel trim. Be careful of bell switching on these two models for this reason. 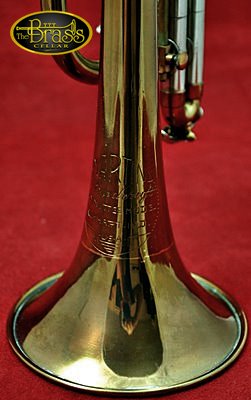 Martin Handcraft Committee Bell ~1939 to 1943 only – They have a circular engraving pattern just sitting above the 2 piece join on the bell. Engraving says: MARTIN Handcraft COMMITTEE MODEL ELKHART – IND. USA underlined. This bell is a personal favorite. I like the minimal design and the bell tail on the examples I have owned have had a squarer design to them. (Note: Shown is a Cornet Bell) 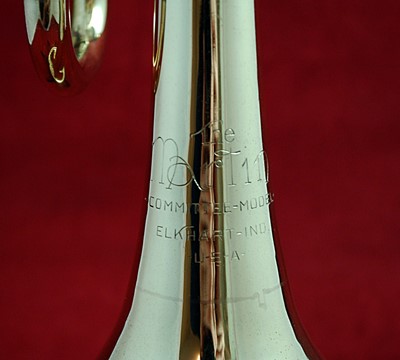 Martin Committee Bell ~1943 to late 50’s – The most commonly recognized script from the standard models. It features ‘The Martin’ in the distinct script with the words COMMITTEE-MODEL and ELKHART – INDIANA – U-S-A. Most also have the two piece bell in raw brass (although I have seen variations) 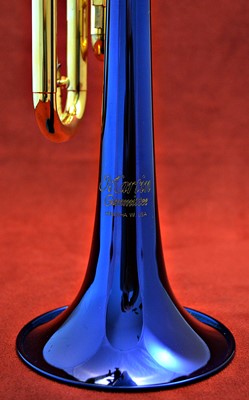 Leblanc Era – these came in 4 different colours: Red, Blue, Black or Lacquered. You could also choose from the minimal logo engraved bell or the highly engraved floral style bells of the same model. Pictured here is a T3466B Bell (Which is the Large Bore version finished in blue with the small logo) 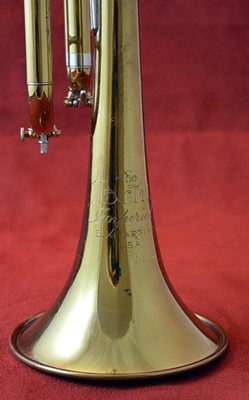 Martin Imperial Model – this is an earlier version. You can denote this by the Martin style script logo and the added Imperial below. The bell is still a 2 piece bell like the Committee models. It is possible that these were made from recycled parts. (This is speculation and not proven). The major difference from my personal observation is the positioning of the bell bend vs. that of a Committee.